Hey all! I’m back after a long nearly two months away! Who knew the life of a pastor’s wife could get so busy during the holiday season!? At least this has given me plenty of time to have some new travel adventures so that I can keep the blog posts coming!

For now, let’s take it back to our final few days in St. Louis, this past summer. One of the last things we did was visit the newly reopened and redone Museum at the Gateway Arch.

One thing that is super exciting about the way things have been redone is that you now can enter the Arch in the middle of the base, instead of through the leg. These new doors let in a ton of natural light, making the whole entryway a lot less dark than it ever was before!

You still have to proceed through security once getting in, but you can buy tickets to go up the Arch before then. We’ve gone up plenty of times before, so we just hopped into the very long security line so that we could see the museum. I think it took us nearly half an hour to get through security seeing as how the new museum had only been open for about a week and everyone wanted to check it out!

Once you get through security you head down a set of steps that takes you to a very cool map of the U.S. during the Lewis and Clark Expedition. And that shows how both Rivers and other trail starters to head west affected the area.

From there you continue down one more set of stairs to reach a museum that is divided into 6 distinct sections: Colonial St. Louis, Jefferson’s Vision, New Frontiers, The Riverfront Era, Manifest Destiny, and Building the Dream. Be careful to make sure you are following the timeline through the sections! Otherwise you could easily end up skipping forward a section and then having to jump back. The timeline kind of weaves it’s way back and forth through the main center aisle.

One display I really liked was found in the Riverfront Era section. They had a replica display of what the city would have looked like, but even cooler, they occasionally turned off the light in the area to show what it looked like at night as well! 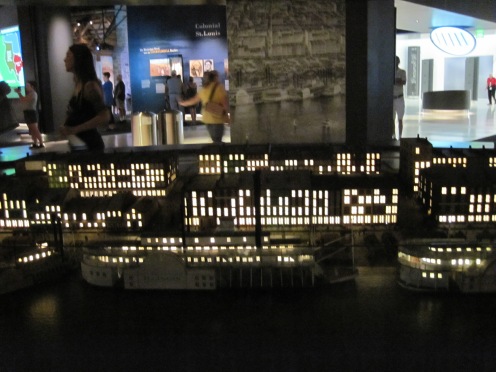 The other section I really enjoyed was Building the Dream. I love seeing miniature replicas of towns and it was also really cool to see how the tram cars travel to the top of the Arch. 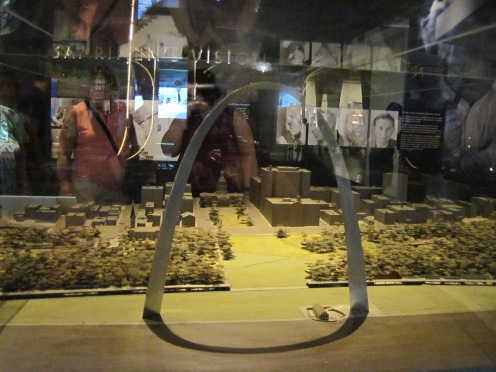 Of course there are so many other neat things in these 6 exhibits, but has it was quite crowded the day we visited, I didn’t get that many pictures, plus a lot of the exhibits were also similar to things I’ve learned and seen at the Missouri History Museum as well.

If you are planning a trip to the Gateway Arch, it is well worth making sure you save time to not only go up the Arch, but also visit the new museum, plus don’t miss out on the Old Courthouse across the street that also has some great historical exhibits and beautiful architecture. But do allow yourselves plenty of time to get through security lines!