Whew! I’ve been absent from here for awhile as we prepped our house in Iowa City for our move to Florissant, MO for Andrew’s final year of seminary. Now that we are settled in the new place for this final school year, I’ve got time to hop back on. Let’s jump back to Memorial Day weekend and take a look at our short stop to the Whapeton Catfish.

Andrew and I have made it our goal since we started dating 7 years ago to visit every single large animal structure in North Dakota. This catfish would be our final large animal in North Dakota. We’ve had a tough time getting this one crossed off the list because it was never on our way to any of our destinations.

Since we chose to take the long way to Bismarck from Iowa City through Sioux Falls, SD instead of dealing with traffic going through the Twin Cities, this was the perfect time to make a quick pit stop.

The Catfish is located on the outskirts of town. You turn onto a road near city hall and follow it all the way to it’s end. The road follows the Red River with a few areas that overlook the river. They also have several campsites along the road/park area for people to camp in their RV’s for the night.

We took a few pictures of the catfish and then walked to one of the river overlooks. Andrew says it was the nicest view of the Red River he’s ever seen and that it actually made the river look good for once! It’s the only time I’ve seen the Red River up close so I can’t quite say if his opinion is accurate or not! 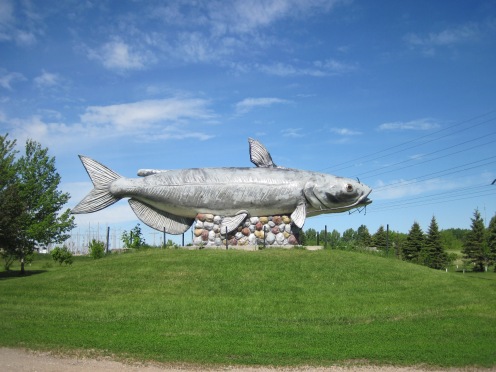